Why we need the whole country on the same frequency - Drax

The modern world sits on a volatile, fizzing web of electricity. In 2015 the UK consumed roughly 303 terawatt hours (TWh) of electricity, according to government statistics. That’s an awful lot of power humming around and, in this country, we take it for granted that electricity is controlled. This means the power supply coming into your home or place of work is reliable and won’t trip your fuse box. In short, it means your mobile phone will keep on charging and your washing machine will keep on spinning.

But generating and circulating electricity at safe, usable levels is not an easy task. One of the most overlooked aspects of doing this is electrical frequency – and how it’s regulated.

What is electrical frequency?

To understand the importance of frequency, we need to understand a couple of important things about power generation. Generators work by converting the kinetic energy of a spinning turbine into electrical energy. In a steam-driven generator (like those at Drax Power Station), high pressure steam turns a turbine, which turns a rotor mounted inside a stator. Copper wire is wound around the rotor energised with electricity, this turns it into an electromagnet with a north and south pole.

The stator is made up of large, heavy duty copper bars which enclose the rotor. As the rotor turns, its magnetic field passes through the copper bars and induces an electric current which is sent out onto the transmission system.

As the magnetic field has a north and south pole, the copper bars experience a change in direction of the magnetic field each time the rotor turns. This makes the electric current change direction twice per revolution and is called an alternating current (AC). There are in fact three sets of copper bars in the stator, producing three electrical outputs or phases termed red, yellow and blue.

Electrical frequency is the measure of the rate of that oscillation and is measured in the number of changes per second – also called hertz (Hz). A generator running at 3,000 rpm, with two magnetic poles, produces electricity at a frequency of 50Hz. 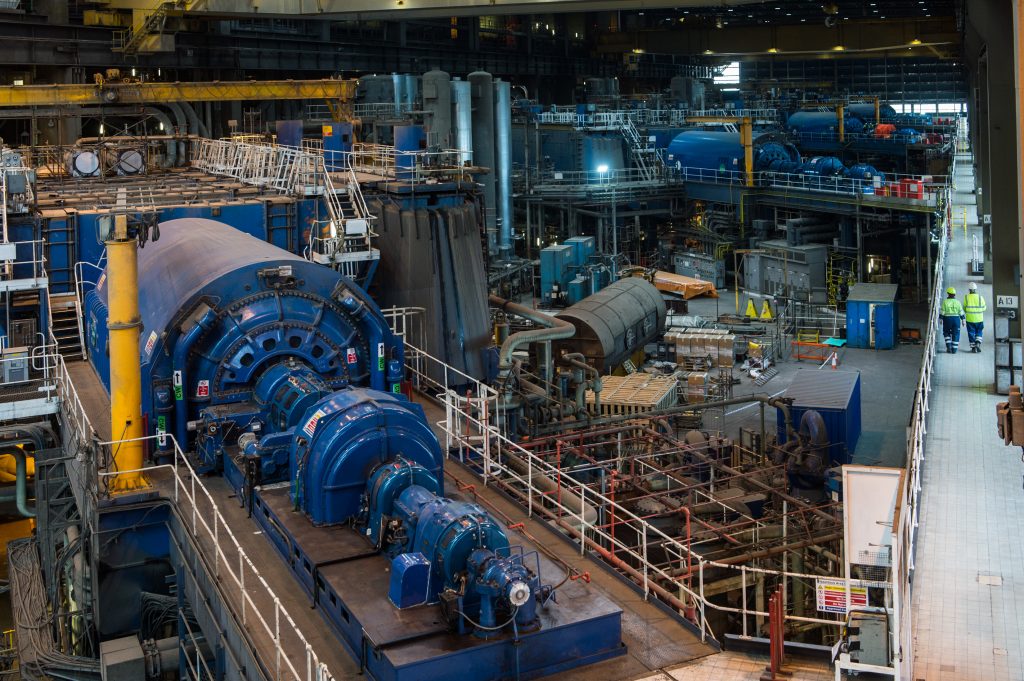 Why is this important?

Maintaining a consistent electrical frequency is important because multiple frequencies cannot operate alongside each other without damaging equipment. This has serious implications when providing electricity at a national scale.

Sticking to one national frequency is a team effort. Every generator in England, Scotland and Wales connected to the high voltage transmission system is synchronised to every other generator.

When the output of any of the three phases – the red, yellow or blue – is at a peak, the output from all other phases of the same colour on every other generating unit in Great Britain is also at a peak. They are all locked together – synchronised – to form a single homogenous supply which provides stability and guaranteed quality.

How is frequency managed?

The problem is, frequency can be difficult to control – if the exact amount of electricity being used is not matched by generation it can affect the frequency of the electricity on the grid.

For example, if there’s more demand for electricity than there is supply, frequency will fall. If there is too much supply, frequency will rise. To make matters more delicate, there’s a very slim margin of error. In Great Britain, anything just 1% above or below the standard 50Hz risks damaging equipment and infrastructure. (See how far the country’s frequency is currently deviating from 50 Hz.)

Managing electrical frequency falls to a country’s high voltage transmission system operator (the National Grid in the UK). The Grid can instruct power generators like Drax to make their generating units automatically respond to changes in frequency. If the frequency rises, the turbine reduces its steam flow. If it falls it will increase, changing the electrical output – a change that needs to happen in seconds.

In the case of generating units at Drax Power Station, the response starts less than a second from the initial frequency deviation. The inertial forces in a spinning generator help slow the rate of frequency change, acting like dampers on car suspension, which minimises large frequency swings.

Frequency on a fast-changing system

Not all power generation technologies are suited for providing high quality frequency response roles and as the UK transitions to a lower-carbon economy, ancillary services such as stabilisation of frequency are becoming more important.

Neither solar nor wind can be as easily controlled. It’s possible to regulate wind output down or hold back wind turbines to enable upward frequency response when there is sufficient wind.

Similarly, solar panels can be switched on and off to simulate frequency response. As solar farms are so widely dispersed and tend to be embedded – meaning they operate outside of the national system, it is not as easy for National Grid to instruct and monitor them. Both wind and solar have no inertia so the all-important damping effect is missing too. Using these intermittent or weather-dependent power generation technologies to help manage frequency can be expensive compared to thermal power stations.

Nor are the current fleet of nuclear reactors flexible – nuclear reactors in Great Britain were designed to run continuously at high loads (known as a baseload power). Although they cannot deliver frequency response services, the country’s nuclear power stations do provide inertia. Thermal power generation technologies such as renewable biomass or fossil fuels such as coal and gas are ideal for frequency response services at scale, because they can be easily dialled up or down. As both the fuel supply to their boilers and steam within their turbines can be regulated, the 645 MW thermal power units at Drax have the capability to respond to the grid’s needs in as little as half a second or less, complete their change in output in under one second and maintain their response for many minutes or even hours.

Before the introduction of high volumes of wind and solar generation almost all generators (excluding nuclear) running on the system could provide frequency response. As these generators are increasingly replaced by intermittent technologies, the system operator must look for new services to maintain system stability.

Given the decline in fossil fuel generation and uncertainty around our power makeup in future decades, National Grid is consulting on how best to source services such as frequency response. The ideal scenario for National Grid is one where services can be increasingly sourced from reliable, flexible and affordable forms of low carbon generation or demand response.

The next generation of nuclear power stations, as with some already operating in France, can provide frequency response services. However the first of the new crop, Hinkley C, is around a decade away from being operational. Likewise, solar or wind coupled with battery, molten salt or flywheel storage will provide an increasing level of flexibility in the decades ahead as storage costs come down.

Thanks to power generation at Drax with compressed wood pellets, a form of sustainable biomass, Britain has already begun moving into an era where lower carbon frequency response can begin to form the foundation of a more reliable and cleaner system.

This story is part of a series on the lesser-known electricity markets within the areas of balancing services, system support services and ancillary services. Read more about black start, system inertia, reserve power and reactive power.  View a summary at The great balancing act: what it takes to keep the power grid stable and find out what lies ahead by reading Balancing for the renewable future and Maintaining electricity grid stability during rapid decarbonisation.