Towering over Loch Awe, Ben Cruachan is one of many Munros that spend much of the winter blanketed in snow. Cruachan is unlike any other Scottish mountain, however. On its slopes lies a dam which stores water in a reservoir that is then transported into a power station built inside the hollowed-out centre of the mountain to generate power by spinning turbines.

When there is excess power on grid, the turbines reverse and use it to pump water from Loch Awe up to the reservoir. In this way it is storing the excess electricity, in the form of water – like a battery – and holding it in the top reservoir, ready to be used by the power station when demand for power increases.

Built on the shores of Loch Awe in Argyll and Bute in the mid-1960s, Cruachan was the first reversible pumped storage hydro system on its scale to be built in the world and is still one of only four power stations in the whole of the UK that can operate in this way, making it a vital component of Britain’s generation network.

The power station is very responsive, and able to react quickly to changes on the system – it can achieve full load (440MW) in just 30 seconds and can operate continuously at full output for around 15 hours if necessary.

Thanks to Scotland’s wet weather, 70 million cubic metres of water flowed into Cruachan’s reservoir from surface water from the mountainside, melting snow and rainfall in 2018. That’s enough to fill 28,000 Olympic-sized swimming pools.

This water is collected and delivered through a complex series of aqueducts which stretch for some 14km and brings water from 75 intakes across the mountain. The intakes range from pipes no larger than small street drains to some large enough for a jeep to drive through.

Keeping these aqueducts in working order so melt water from snow can continue to flow into the reservoir is one of Pirie’s main tasks.

“Even in freezing conditions the water will still flow through the aqueduct system, the intakes have a built-in feature which allows the water to flow into them even if the surface is frozen solid,” he explains. “Any snow or frost on the ground eventually thaws and makes its way to the reservoir.”

Cruachan shows that with a bit of ingenuity and determination, Scotland’s dreich weather needn’t be a negative. The rain and snow which fall across the Highlands helps produce renewable electricity that powers our homes and moves us closer to a net-zero future.

The Hollow Mountain shows that every cloud really does have a silver lining. 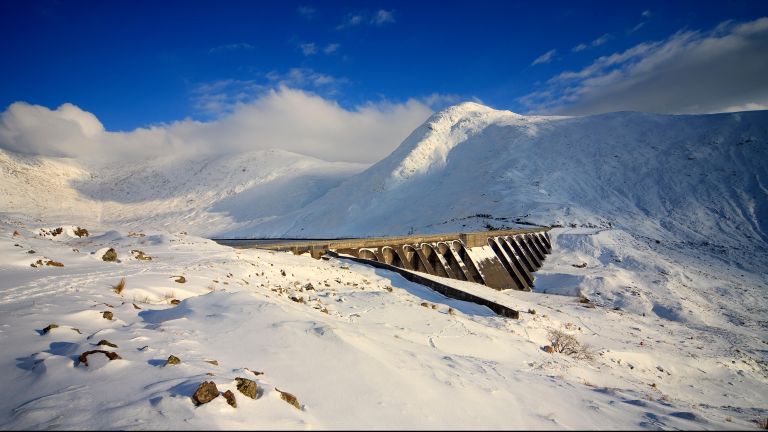 Top image: A Highland cow with Ben Cruachan in the background.