Drax apprentice evening inspires the next generation - Drax US

More than 160 students and parents attended the event at Drax Power Station, near Selby in North Yorkshire, to find out more about working at the site, which is the largest decarbonisation project in Europe.

It was the first time the power station had held an event of this kind and it comes as it plans to increase the number of training roles available next year from nine to 12 – meaning it will have doubled the number of apprenticeships offered in the space of just two years. 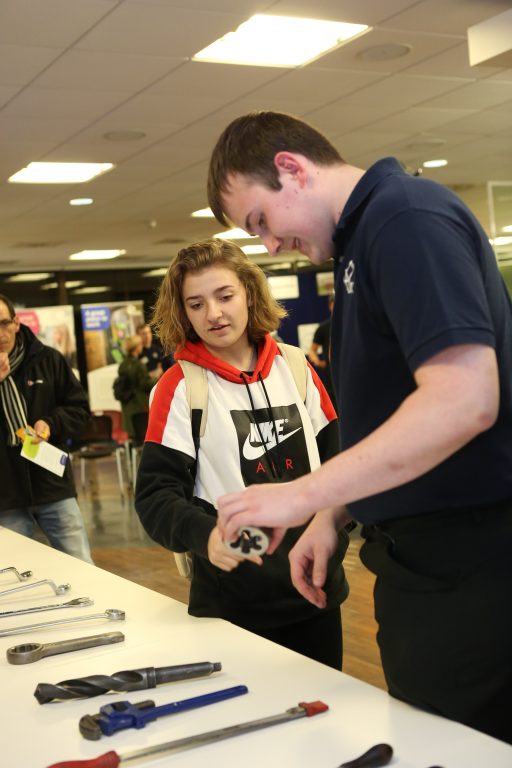 “This event is helping us to build on our long-standing commitment to promoting education and skills in the North of England. Every business in the Northern Powerhouse region has a role to play in creating opportunities for young people and raising aspirations – encouraging them to develop the skills they’ll need in the future.

“Seeing so many young people attending events like this shows how important apprenticeships are to students, as well as to businesses like ours. Our apprentices are the rising stars at Drax – they’re the key to the long-term success of the business. An apprenticeship is a brilliant way to begin a career in a variety of roles here.”

The students who attended the open evening, most of whom were in their GCSE year, met with some of the current apprentices at the power station to hear about their experiences.

The mainly 15 and 16-year-old students were also able to sample a virtual tour of the power station and attend workshops on interview techniques and CV writing.

Resourcing manager Shelley Lawton, from Drax’s HR team, said the evening showcased the career opportunities at the site, which offers apprenticeships in both technical and office-based roles.

The event was part of Drax’s long-established community programme and commitment to learning and skills. It aimed to help students with their applications regardless of whether they’re planning to go on to further studies or pursue jobs at Drax, or elsewhere.

“The evening was a real success and we hope to make it an annual event. The students were really engaged and had some excellent discussions with our current apprentices and staff members.

“Our 2019 apprenticeship scheme opens to applications in a couple of weeks. We’re looking forward to meeting our next generation of new starters who will help to continue to build our business.

“We hope the CV skills and interview technique workshops were useful to everyone who attended – whatever they plan to do after school. Not all of them will apply for a role at Drax but, hopefully, they’ll have learnt new skills which will help them to be successful in the roles they apply for in the future.” Nine engineering apprentices began their careers at the Selby-based power station in September, a 50% increase on apprentice numbers on previous years as Drax continues to invest in and promote STEM skills. Twelve apprentice roles will be available in 2019.

The energy firm also sponsors a number of PhDs at Sheffield University, producing cutting-edge research into areas such as the impact of human behaviour on vehicle to grid technologies where, in the future, electric cars could store and discharge power back to the grid to support the electricity system. Drax will be accepting applications for technical apprenticeships from December 19 until January 31 with further opportunities in business support areas, such as finance and business administration, becoming available throughout the year. Drax is keen to attract applications from people of all backgrounds and to encourage diversity.

More information about apprenticeships is available on the Drax website.